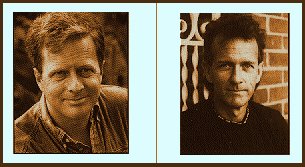 Poets of the New Formalism

"A collection of the flowers of verse" -- that's how the OED describes anthology. In the Greek Orthodox Church, an anthology is a collection of devotional pieces. Anthologies of poetry may be both. They may also be collections of political messages, although you won't find that listed in the current OED. There are many anthologies of poetry published each year in the United States, most comprised of flowers few readers seem to want to pick. This one, however, claims to be different.

And it is. For one, the collection is drawn almost entirely from younger poets in the New Formalists movement, which is part of a larger transformation in the writing of poetry over the last twenty years, in which the following precept is predominant: how a poem is made is as important as what it has to say. That's different too, although it may surprise those outside of the circles of the poetry world that such a precept would even have to be said aloud. Isn't most artistic expression developed from a marriage of formality, passion and analysis?

In jazz, for instance, you would hardly expect Diane Reed to say that "we have to sing badly in order to communicate the world as it is." And you wouldn't expect Spielberg to throw a hodgepodge of fragmented images onscreen as "the only true picture of the Holocaust." Nor would you expect Stanislaw Lem to write a two hundred and fifty page novel about himself and call it science fiction. For a long time, though, similar ideas were official points of view among a certain crowd of critics and authors of poetry. This might be why so few contemporary readers pay attention to poetry from such circles. Why would such poetry matter, asked Dana Gioia some time ago. Indeed, why would it? Story Line Press has tried to change that perception for a long time, not by trying to forcefeed the same old stuff, but by introducing authors who write for an audience.

In fact, for the past ten years or so, Story Line Press has been the most significant publishing voice among those raised to reverse that popular judgment of poets and poetry. And one way they've tried to do that is by re-introducing poetry in the form of short stories or novels. With Iris, as tough as a Nelson Algren story, or The Diviners, or City Life, or Louis Simpson's There You Are, Story Line's editors have tried to show that poetry can be as good as prose in writing fiction. You won't see them on the Times bestseller list yet; maybe they never will be. But as a river begins with one spring on a mountainside, so too do changes in the perception and popular enjoyment of an art form. The question, though, is have Mark Jarman and David Mason contributed to that objective with their editorial guidance of Rebel Angels?

There are lots of cheap shots to aim at anthologies. One is the complaint about who was put in, another about who was left out. Someone might carp about a confusing message in the title. Perhaps another would challenge claims on the back cover. This is not, for instance, the first collection of formal lyrics from the Expansive Poetry movement. Story Line's own A Formal Feeling Comes (edited by Annie Finch) qualifies for that. One could complain all night about such trivia but the result would only be loss of sleep. The real issues of this anthology can be found by answering the following questions. 1. Were the poems good? 2. Did the collection present an adequate cross-section of people working the territory described? 3. Did the anthology illuminate the idea the editors put forward as the basis for its construction?

On all three counts, Rebel Angels belongs on your bookshelf. Discussion will follow as to why, but first, this interjection: there would have been one big complaint in this review but for the ongoing preparation at Story Line of a second anthology from the Expansive Poetry movement, a volume to be devoted to narrative poetry. That being the case, the one big complaint about "how could narrative be ignored in favor of short, formal lyrics, etc., etc., etc." was defenestrated. With the good expectation of that volume informing the absence of a particular complaint, it's time to return to why Rebel Angels is worth your time.

The poems are wonderful. The cross-section is wide and inclusive. The number of points of view and tones of voice, all expressed in the "rule that liberates," as Richard Moore has described meter and form, suggest that the editors are right, that form and meter don't suppress, but enhance expression, no matter what its subject. Look first at Rafael Campo's "Aunt Toni's Heart," one of the strongest poems I've read in a long time:

The straightforward, contemporary diction, the sharply defined details, the strong verbs and nouns -- isn't this what disciples of W.C. Williams claimed for "free verse?" And yet, you are unlikely to find any of that work quite as sharp as this is. The prose rhythms create a powerful tension with the metered lines and rhymed couplets; the movement of this stanza, as the five others, is unlike that of most contemporary poetry. For this poet, mastery of formal elements in a modern context make the work memorable and alive. Now look at Tom Disch's "The Rapist's Villanelle".

Tom Disch may be one of two poets who could get away with a poem like this one, written in the voice of a rapist who's enchanted by his potential victim. The other, Australia's A.D. Hope, is too far gone to write anymore, so it's a good thing that Disch can fill such large -- shoes. And he can. Villanelles are a headache for most because if you make the slightest error in the two lines that repeat throughout the six stanzas there's nothing to be done to save the poem. If Disch makes mistakes like that, he isn't telling. The diction is startling; perhaps the narrator is a buyer for Bergdorf's. In opposing such diction to the narrative direction of the poem, Disch creates an unexpected character who may be more frightening than the standard police blotter suspect. That was probably Disch's intention. Such is not possible without the application of some art to the raw material. Isn't that what the re-introduction of meter, rhyme and form to storytelling is all about? It's not to obscure, be precious, or play let's pretend. There's no reason to. Now look at Phillis Levin's "The Shadow Returns".

The use of rhyme, exact in a few cases, and slant rhyme in the form of assonance and consonance in others, gives this poem the peculiar, resonant authority one often hears in Emily Dickinson. It makes the poem impossible to read without noticing how it sounds, or without being stretched and pulled over the meaning. As with the effects of Tom Disch and Rafael Campo, it is presumed that this was not by accident. Avoiding accidental effects, or said another way, controlling expression, that it might come closest to an author's intentions, is a principal reason for using formal prosody, as is choosing words carefully. While an unreflective estimate of such an approach might say one could not invoke mystery or evocativeness of any kind with such an approach, the opposite is true. Such affecting quality is one of the most striking results of using formal elements in art. Finally, look at Marilyn Hacker's "Nights of 1964-1966...":

If you don't know Marilyn Hacker, this should inspire you to read more of her. She and Fred Feirstein both bring variations on a sharp, earthy view that's sadly missing from most American poetry and has been for most of our literary history. Brace rhyme, or ABBA etc., used with slant rhymes (unavoidable in English, particularly in a longer poem), is a wonderful scheme, but not many use it. The wonder is not why, but why not. Look at how it contributes to the rhythm of this small segment of one of the best poems in the anthology. Such work, as Feirstein's own Manhattan Carnival, moderately excerpted in this anthology, is a strong counterargument to the idea that rhyme and meter are instruments for the precious and the elitist. They are for poets such as these four, only a small group representing 21 others.

It would be difficult to find a more divergent quartet of poems, but look at the common elements of rhyme, meter with varied feet, and an overall structure in each piece. The writers pursue different expressive objectives, but they employ the same means. How could this be? The poems don't sound alike. Levin's sounds almost like an incantation. So does Disch's but to a radically different end. Campo and Hacker sound intensely conversational but they're talking about very different things. Isn't this a contradiction? Doesn't surface have to be the difference?

Before 1900, of course, such a thought would have astonished readers, poets or critics. A common language and prosody were expected to be used to convey strikingly different content and the accumulated "anthology" of older verse often did. But weren't such strategies "proven" inappropriate to express such complicated times as our own?

Time and again in this anthology, the editors bring forth authors who answer that question in a way it hasn't been for many, many years. There's the mordant humor of R.S. Gwynn in "Among Philistines," the stark tone of Dana Gioia's "Counting the Children," the strong, bluesy "Ballad of Aunt Geneva" of Marilyn Nelson, and Molly Peacock's form-stretching "Desire." Each poet pays as much attention to the maker's art as to the content; both the poem and what it delivers to a hearer or reader are the stronger for it.

Anthologies, of course, aren't published solely to bring you a special group of poems. They're also brought out to introduce you to a wider range of poets than you may know about. Poetry, even the best of it in America, is so miserably publicized by newspapers or other media outlets that such anthologies form a key means to discovering new voices in American poetry. Rebel Angels, one expects, will lead readers to many other poems and books by its contributors, and will also lead, one expects, to Volume 2, the Story Line anthology of narrative poetry.

In case you hadn't guessed, Rebel Angels is highly recommended. 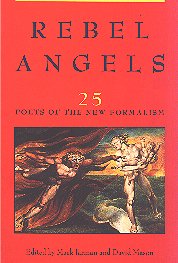