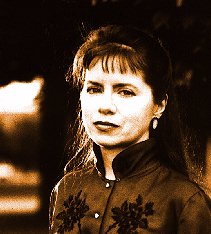 Whirling Round the Sun

Most books in any field can be taken or left according as is the central mood -- ours as we linger by a bookshelf. Some, such as Suzanne Noguere's new Whirling Round the Sun, deserve more. We know that as soon as we start to read them. That may not sit well with those hired knights who tilt against the windmill of judgment, considering it heresy, but this Web magazine is not here to uphold orthodoxies, but to point out poetry of astonishing beauty and variety that sometimes appears, like lilies blooming on the edges of a swamp. Let the bullfrogs honk their stale complaints, jabbing their tongues to suck at passing flies; the preference here is to examine this wonderful book, just released by Midmarch Arts Press.

Those who follow Ms. Noguere's work, circulated for 20 years in such fine journals as Sparrow, The Classical Outlook, Jazz, The Literary Review, The Nation, Pivot, Poetry and many others, know that she has chosen, as have Thomas Carper, Dana Gioia, Mary Jo Salter, Rina Espaillat, and others, not to imitate W.C. Williams, but instead seeks a way to fit three thousand years of poetic development into a contemporary American voice. The choice between "voice of the people" imitators of W.C. Williams and real innovators in an art of poetry that has come through half a dozen different civilizations to ours seems plainer than a red wagon and a lot more interesting. Look at the following by Ms. Noguere:

This is the jungle as a naturalist sees it, a beautiful but terrifying concert of lives in both competition and collaboration; nature is nothing without both, and we can see it this clearly because we are a part of that nature. The language is sharp and refuses other human judgment of the scene. And yet to write the poem is to accept that without her human eye the scene could not exist. What's troubling for some about such a poem is that, because it is well thought out and clearly expressed, the poem doesn't lend itself to being "authored" by a critic. The process of critical authoring (this reviewer's term) is a familiar one; a poem of inexplicable oddness and absence of meaning or art is "illuminated" with several thousand words of prose, many of its phrases extracted from the boilerplate of a defunct politics. This strategy, so useful for gallery owners in pitching otherwise indistinguishable artists in Soho, is unsuitable for Suzanne Noguere's poetry, as it is for Michael Schaffner's or Mary Jo Salter's. Instead, one must accept the author's invitation to be confronted by what she meant when composing. As in much of Noguere's other work, she means "this is what I see or imagine; come look at it with me." What a refreshing change from the all-too-usual botched expression that has to be explicated by someone else. Or look at the following:

Regardless of the claims of a certain kind of politics that the human eye is always closed to the truth (except that of the critic), the truly modern eye is open, not thickly lensed with ideology, prejudice or sloppy sentiment. As in the previous poem, the underlying theme is the terrible contrast of beauty and cruel process, the violent death in the beautiful setting of the former, the insurgent chaos of age spoiling the beautiful subject of "Extremities". And yet the poem has a lovely order in its carefully varied blank verse, and its structured processing from this beginning observation to the end with its expectation of a death. How often critics will remark on such work as Noguere's and say it is too orderly while the times and the subject are not. And, compounding the mess, it has the nerve to use this British prosody.

In deciding whether or not to agree with such statements, one thinks of the 1600's, the period of the English renaissance. It was a time of plague, wars (international and civil), the radically disruptive appearance of science, and of violence in the streets that would be the envy of an LA street gang. And yet Elizabethan poets wrote with brilliance in meters, rhymed forms, and with a persuasive and logical coherence that is still the envy of good attorneys and only surpassed on occasion in the sciences. Are we supposed to accept the notion that this was not an appropriate response to the times that Shakespeare and Donne were living in, that it would have been better for them to have written fragmented verse that no one could understand without the assistance of a critic? How is disorder shown in disorderly art? Isn't it more likely that disorderly expression will only show the author incompetent and give the power to transmit experience and imagination entirely over to the critic? Noguere will have none of that.

As for clarity, this review wouldn't consider the book as worth your time if that weren't a feature of the poems. And as for "British" prosody, the Brits, privateers that they were, plundered it from the Pleiade in France, who borrowed it from the Italians, who translated it from the Arabs, who preserved it from Byzantium, who brought it along from Rome, who adapted it from Greece, who probably stole it from Egypt. The Egyptians may have gotten it directly from the horse's mouth, but we don't know who the horse was, although some wag might suggest that the horsey muse of ancient poetry was stalled on Mt. Ararat. In brief, there is no "British" prosody; there is an art of poetry of this world, one that is frequently added to (the pantoum from Southeast Asia, the stop short and other forms from China, others from Japan, and, with the impact of Woyle Soyinka, one may expect more from Africa than that already derived from Egypt). One is not required to use this world's art of poetry, of course. One may propose an art of poetry based on the life recently discovered on Mars.

Suzanne Noguere, with her wonderful variations on this world's prosody, sings in these poems, as the good use of the art of poetry permits one to do. But you'd hardly call her a crooner in this one:

Noguere writes about the world outside. What other world is there? As for her prosody here, purists might complain about feminine line endings being followed by troches at the beginning of the next line, as happens between "unmistakable" and "Hamilton". And in the hands of a mediocre practitioner that would be true. Here, however, such use changes the rhythmn from line to line, to wonderful effect, here marking a sharp transition from speculation to action. As in religion, formal construction is a sort of prayer that carries one to the altar, but once there, the sacrifice the artist makes must be one of her own design or no one will answer, which lesson Noguere must know; these poems are distinctly her own, no matter how ancient the roots of their poetic art. It seems impossible that this lesson has been lost on so many others, in some cases even by people describing themselves as New Formalist poets. Noguere is not a New Formalist, a foolish term to begin with. She is of that other group, including Wade Newman, Fred Feirstein, Kelly Cherry and Fred Turner, that Dick Allen describes as "Expansive Poets," a writer who takes it upon herself to increase the range of what she writes with wider views of subject matter and craft.

A good example is her enriching use of the ancient sonnet form. Look at this variation on a Petrarchan scheme, a model going back at least to the 13th century, with antecedents in Islamic culture:

Vigil of Venus indeed. Some might be put off by the reference, which, according to Dr. Joseph Salemi, is to a Latin poem anonymously authored in Rome's late empire period, and sometimes considered the first in a lyric tradition in medieval literature praising spring, but you don't need to know any of that for the poem to work. The references are not the heart of the meaning, but part of its sense of play. While it is hard to imagine good poetry without a sense of play, this point of view has faded in the more exalted circles. Perhaps, if there are more books like this one, that notion will creep back into English departments who've discovered stern invocations of the "Revolution" have had little effect.

Some think a poet's understanding should be limited for anything beyond the kitchen sink (or, in an older generation, beyond the handheld mirror), for fear that in stepping beyond "the local patois of some three hundred words," as Auden put it in the sequence Horae Canonica some forty years ago, the poet will presume upon the equality of a reader. Since most poets only read each other's work (there being no one else who knows when what and who is published), this does not bode well for those of us who expect to read about a recognizable world in the poetry we pick up off a library or a bookstore shelf. But put those forebodings aside for Suzanne Noguere's Whirling Round the Sun; she has a striking lack of interest in portraying herself (or the reader) as an ignorant fool:

In the next stanza the poet springs her surprise, as we discover that the clear description of the mulberry's history has been used to string an elaborate and beautiful metaphor about writing poetry. Any reader, like a fly to a web, will be captured by it.. Now, while it is true that a child might not get this, or that someone borne to another language might need a translation, who else would have such a hard time that they wouldn't linger over this lovely poem to coax out its subtleties? Twists and turns delight readers as much as they delight explorers of the latest dungeons and dragons games; it is a human trait, and aren't we tired of human traits being scorned in the name of some obsolete politics or other?

One can't ignore, of course, another critical strategy offended by Ms. Noguere's clarity, which can be found in the scrambled fragments of poets following in J. Ashbury's lights. They declare that confusion is the only way to show confusion. One ought to be careful in following such lights, however. For the amusement of such a leader, whose model was DeKooning, not a doctoral thesis, he may have put the tail lights on the front of his car of poetry, leading his disciples into a head-on collision.

It seems strange that contemporary critics would harken back to Millay, Bogan and Bishop as splendid examples of another tradition (in this case, other than where the boys were) and yet find it in their hearts to ignore poets who follow in that great line today. This would be a bit like the late Joseph Brodsky writing about the brilliance of Ahkmatova and then turning to review subway station grafitti as indicative of modern Russian sensibilities. Regardless of where she's expected to be with her spray can, Noguere is in that prouder line mentioned above; further, it more than evident that she's very proud to be there.

It has the clarity of Millay as well as her strong attachment to the subject at hand. Without those, whether the poems are about the last days of a dear aunt or the first days of a war, poetry is hardly worth reading. Whirling Round the Sun is worth reading; if you have a mind to, substantial portions of it are worth memorizing as treasures not to be left at home. Do yourself a favor; find Suzanne Noguere's book. When you're done with it, lend it to a friend. 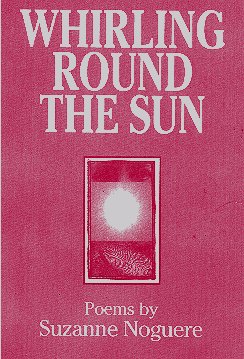 Whirling Round the Sun