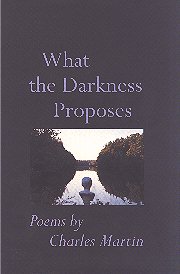 What the Darkness Proposes

Turn to any of five hundred poems written between 1925 and 1965 by W.H. Auden and, heavily as you might swing your critical hammer, the material you strike will ring like a fine bell: coherent in expression; on key with the time of authorship; and with ironic overtones to reinforce their overall effect, from "A Summer Night" to "Letter to Lord Byron" to "Dover" to the later "Shield of Achilles." Some critics were disturbed by this and described Auden as "facile," as if competence were a sin real artists didn't invest with the expenditure of talent. And of his older contemporaries, it's hard to imagine Robert Frost, the author of such stark stories in blank verse as "The Fear" and "The Black Cottage," chatting in a club with a man of such ironic sensibilities as Auden's, even as an allegedly committed leftist in the 1930's. Yet, think of poetry between 1910 and 1965 in English without either one of them. It is as hard to imagine as an Elizabethan age without Donne and Shakespeare. And it is harder to imagine that empty space than it is to imagine the same world without T.S. Eliot and Ezra Pound, who fostered the reputations of both.

It is difficult to look at poetry for the last twenty years without seeing similar distinctions, as there are between Frederick Feirstein and Molly Peacock, or Suzanne Noguere and Rafael Campo, or between Richard Moore and Charles Martin. The impossible posture of poets who claim that there is only one way of writing, the absurdly (and ironically) plain style of W.C. Williams, is made more vivid by looking at the aforementioned sextet. Demotic appeals to the contrary, each has a distinctly different way of looking at life; each is a distinct voice in a way that a W.C. Williams apostle wouldn't dream of being. And yet each used or still use pretty much the same tools, structured, metrical poetry -- often with rhyme. What the Darkness Proposes is Charles Martin's latest contribution, and he is prepared for critical reaction with a message buried halfway through the book:

Another reading sees the book

As one that poets often get
Thrown at them by critics who
Rise up, determined not to let
Our follies unproven go:
"Do just as Theory tells you to,
Obey when History says No --
And since we're all that matters, why
Must you keep writing poetry?


From A Walk in the Woods Above the Artist's House

Well! Just when you thought it was safe to go back in the water....

A sharklike pose has uses; reviewers may decide to stay in shallow waters. Easily frightened bathers may leave the beach. Of course, someone may decide to come back with harpoons, but neither is necessary with Charles Martin and this new book. The more you swim with it, the less likely it is that its poems will bite your legs off. There are some old treasures (old to those who've heard Martin on the poetry circuit, but new to those who haven't read him recently):

With a background of a popular lingerie catalog, to which it often refers, this poems swiftly evolves into a witty essay on self-deception and modern presumptions of liberation whose art is as much in Martin's bemused detachment as it is in its well-varied meter and skillful rhyming. The latter of course turn this into a good performance piece; it rouses laughter aloud. The contrast between the close rhymes, the large number of end-stopped lines and the detached tone create a slightly surreal effect, as if Stan Laurel were giving a sermon. There are some new treasures:

Contemplating a children's toy could swiftly turn into a maudlin recollection of "that Elmo I had" or slapstick about "how Spot ate Raggedy Anne and Andy." However, you'd never mistake Martin's approach for slapstick; and maudlin isn't this poet's way. Turning the old toy in his hands, the narrator of this poem rolls back more than years, turning up a peculiar evolution, from dead dinosaur to tar pits to plastic dinosar made from the oil that is the chief artifact of its ancestors. These chains of chance (or polymers, in this instance) are all around us; their results bind the staircase of DNA and anchor the landscapes on which we walk. The late Carl Sagan took the view that this was an astonishingly beautiful dance of billions of molecules, a point of view hard to suppress when you begin to see these processes as a great concert. Martin will have some of that, but not that much. Is it really so wonderous, this great symphony? Is it possible to see accident as either marvelous or tragic? Martin suggests, as have many predecessors, that it is not. In A Walk in the Woods above the Artist's House, midway through part I, the narrator discusses Philodemus, a minor Roman philosopher whose life and work were subsidized, in effect, by the merchant Piso, who set him up in a villa in Herculaneum, a pretty place that inspired the author to thoughts on "art's supremest good."

This lengthy poem, which comprises more than a third of this book, was at first a source of distress. What? Another poem about poetry, and set in a writer's colony? Hasn't this been done? Of course it has, and often badly, particularly if it's nothing but a journal of the day-to-day experience of the writer. But this is no more exclusively about writing poetry than Auden's neglected "Letter to Lord Byron" is. It's a poet's ramble, combining shop talk with highly refined notetaking on a variety of interests and events, history and fable, bound together by the project which the narrator hopes to pursue, and from which he is constantly and not unwillingly distracted after what are described as hours of work but seem more like minutes:

The words and their consideration become a gravity drawing the narrator back into the poet's craft, the value of stringing of words in coherent expression, with questions about the appropriateness and meaning of names, on and on to the event horizon of questioning the value and utility of more than the simplest, sparest language. These are questions the go far beyond considerations in poetry and step out into philosophical speculations on the possibility of meaning that have, for the most part, been abandoned by poets for a century. But, there is that project; and the narrator worries aloud about digressing too far and comes back to solid ground:

Not a worry Martin should have about himself, but it is a question that is always serious, not just for poets, but for the conduct of life itself. What is this repetition? What is its point? Is there any reason? And yet they're asked so often that one cannot say them aloud too seriously, else be considered naive. Martin even steps up to tell us why in this memorable opening to part III:

Where this poem goes next is yours to find for, as much as it might be liked, one can't quote more without cheating both the author and the reader.

Another lengthy piece in rhyming stanzas is the concluding Stanzas after Endgame. Written in rime royal, the old Scottish scheme, it takes us to the battered refuges of the avant garde. I don't think it's any surprise that the play picked for the journey to the theater described is Beckett's Endgame, written more than 40 years ago. The theater is a run-down black box in a building about to be torn down, with beggars circling the box office, and squeegee men patrolling the streets to wash a sucker's windshield with dirty water. Junkies lurk in the shadows and the place smells of their urine. Into this milieu of the battered, tattered and pretty much abandoned avant garde of a playwright who has, after all, been dead for quite a while, come most unlikely visitors:

The piece, like our own view of the fading Modernist and post-Modernist enterprise of institutional culture, is full of ambivalence. It shows a decrepit and grim setting of a play not very modern, and not very satisfying as the paradigms of science itself shift away from the grim determinism of the 19th century, which affected Beckett as much as they twisted politics and political expectations, but the poem's narrator still posits the idea that they are Philistines who find Beckett's plotless and alienated citizens of the stage as dissatisfying and even boring. But then...

We are like that narrator, variously on the scent of the latest remake of some Weimarian and faded archetype and then rebuking the artist who sprayed it on a wall. We can't escape the strength of Beckett's shattered view, nor that it seems to frame a picture of world that is not one we really recognize anymore. At Endgame where do we go? Not the end, certainly, but not that long departed beginning either.

What the Darkness Proposes, Martin's fifth book, takes exploration to enjoy but it is highly recommended. It's available or can be ordered in most bookstores or, if all else fails, directly from Johns Hopkins. In a short time, it should be available at Amazon and you can order it here.

What the Darkness Proposes