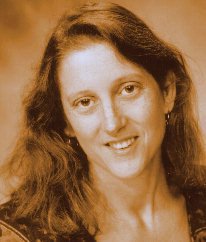 "Running in Church," reprinted by special permission of Annie Finch,
originally appeared in Agni Review, reprinted in The Dark Horse.

"Sapphics for Patience," reprinted by special permission of Annie Finch,
originally appeared in The Formalist and reprinted in A Formal Feeling Comes.

"Inside the Violets," reprinted by special permission of Annie Finch,
originally appeared in Southwest Review.

Annie Finch is highly regarded as an editor and critic, but we are about to be graced by the appearance of her first book of poetry, Eve, which will be released by Story Line Press in 1997. An essay by her appears elsewhere in this issue, but what follows is a selection of her poems, which have not only been published in some of the best journals in the U.S., but have drawn the attention of composers for obvious reasons. She has a lyric gift, expressed through formal prosody that does not restrict, but rather enhances, these pieces.